They don’t call it paradise for nothing. Hawaii is well-known for it’s incredible year-round weather, scenic beaches, nice people and aloha spirit. But when it comes to food, Hawaii has some of the most diverse and delicious cuisines from all over the world. Because Hawaii’s population is made up of settlers from the east- China, Japan, Korea and the Philippines and from the west, a rich local food tradition was born. Without further ado, here’s my list of the 5 must-eat cuisines in Hawaii:

Perhaps no cuisine ups the ante more than Chinese food in Honolulu. Forget about your greasy neighborhood Egg Fu Young joint. Honolulu serves up some of the tastiest Chinese dishes, from chow fun, lobster prepared your way (I prefer black bean sauce), minute chicken with cake noodle (only found in Hawaii) and dim sum that rivals Hong Kong. Leave your preconceived notions of what Chinese food is at the door, because Hawaii’s Chinese food will definitely impress you.

If you thought Japanese food is synonymous with sushi, you’re only half right. There are so many other amazing dishes and concepts that comprise Japanese cuisine. Pictured above is a Japanese-style hot pot- a mouth-watering amalgamation of tender meats and fresh veggies slowly simmering in a spicy broth. Pair it with some beer, and now you know why this popular and fun way to eat makes for lines out the doors. Hawaii also has udon (thick hot or cold noodle) restaurants, places for yakitori (grilled meat skewers), sukiyaki (another version of hot pot cooking) and butter yaki (similar to cooking in a hot pot, but everything is cooked in butter instead). Of course the sushi quality in Hawaii rivals that of Japan, so don’t forget to indulge in raw fish while in Hawaii.

You would think this would go without saying, but you must try Hawaiian food in Hawaii! So many people come here and don’t even know what Hawaiian food is. They are missing out. Here’s a list of some popular Hawaiian dishes: Chicken long rice, haupia (congealed coconut custard), lau-lau (pork wrapped in taro leaves and steamed), kalua pork (cooked underground), lomi lomi salmon (cubed raw salmon salad), pipikaula (dried, seasoned beef like beef jerky only tastier) and poi (pounded taro root pudding). You might find some variations of the aforementioned items at different fast-food or even sit-down restaurants, but nothing beats an old Hawaiian grandmother serving you her recipes in a traditional Hawaiian restaurant. Try Ono Hawaiian Foods on Kapahulu Avenue in Honolulu.

Think you know a thing or two about good BBQ? Unless you’re talking about Korean BBQ, you don’t. Korean food is my favorite cuisine and here’s why: there are innumerable flavor combinations possible from one simple sit down meal. A typical Korean dinner entails several different types of meat you grill on the table yourself (social and fun) and never-ending bon chon, or side dishes. Picture kimchee (fermented cabbage), salad, daikon radish kimchee, boiled potatoes, gochujang (fermented spicy/delicious bean paste), sprouts, noodles, rice, fish cake, cabbage…the list is literally never-ending. Pictured above is a Korean BBQ plate lunch consisting of barbecue chicken, beef and kalbi (the king of meats, also the tastiest), a variety of veggies, white rice and mac salad. Believe me, you have to have Korean food in Hawaii. They know what they’re doing. 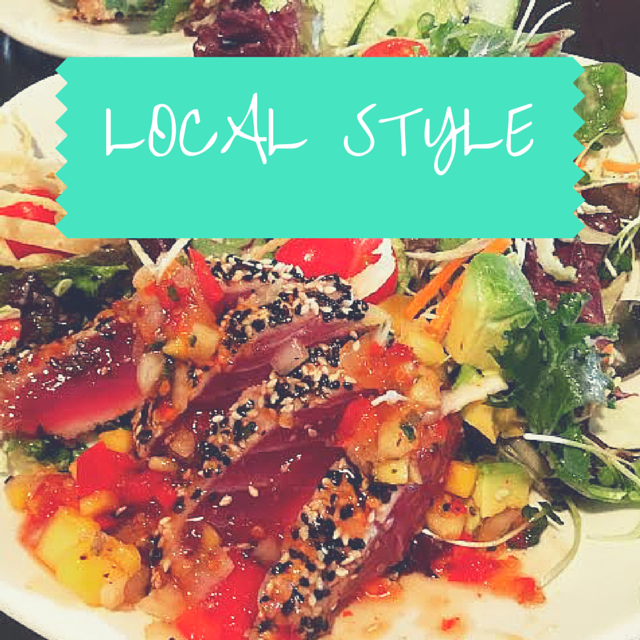 Local style is a term for anything locals like to do. That’s no exception to food. Local style food can be pretty much anything the locals like to eat, from ahi salad with mango salsa (pictured above), to spam musubi (spam on top of rice wrapped in nori), hot dogs, saimin (noodle soup) fried chicken, li hing mui (Chinese salted dry plum) candy, mochi, and shave ice. When in Rome!

2 comments on “5 Must-Eat Cuisines in Hawaii”